There’s lots of excitement and

There’s lots of excitement and

There’s lots of excitement and anticipation in the Guelph running community with fund-raising for a new 8 lane track furiously ramping up. With an impending dead line next Tuesday looming, the donate now call is out, visit the Guelph Victors Site if you can.

The Weather Network came for a visit Tuesday. Afternoon host Suzanne Leonard talked with DST about winter running, “ I don’t think there’s much of a difference between winter and other times of the year, personally,” says Scott-Thomas. “You just make it a regular part of your life and get out the door.” check video out here  Watch for my running cameo. She also spoke with me, about training through the winter and other running related topics. Keep an eye out of that one on TWN in the next few days. 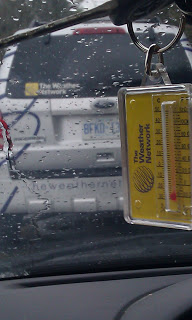 This came in my Inbox recently, something I think a lot of you may be interested in, Dr Trent Stellingwerff (I work with on nutrition) in podcast talking about
Blog

Trip to Ikea. Heidi’s still a little too young to be left at play area, she still had fun shopping

As I crossed the finish line the crowd countdown was down to two seconds, maybe 1. That actually didn’t give me a whole lot of security I’d got under for standard, the finishing clock is often started by hand which can be a fraction slower then official timing equipment. As everyone started congratulating me, I decided to wait until someone could tell me definitively it was under, before celebrating. It was a good 10-15 minutes before I found out. Nicole Clark from Athletics Canada was standing close and said “SportsStats (official timer of the race) has you at 2:11:28”, it didn’t sink in until she passed me her phone with the time on it! Then I let out WHOO HOO 🙂 One thing I have to clear up is that my time DOES NOT automatically get me on the team for London. What it does for now is, it meets Athletics Canada’s Olympic qualifying standard that one must reach in order to have a shot at going. Every county has three spots per event they can enter athletes in, in Athletics. That’s means Canada can send up to three marathoners so long as all have standard. Currently Reid and myself are the only two that have met this mark, others will trying for it in the coming months! They have until the Canadian Track&Field Championships in June of next year. So, if two other Canadians run faster then me before that, I would be bumped to 4th, and not go. Good news is that I too can run another marathon in that window if needed. Hopefully that clears up things for anyone who wasn’t sure what exactly 2:11:28 did for me. All the being said Sundays race was a HUGE step forward in my hopes of representing Canada again!!!!!

I’ve really enjoyed reading all the message of support this week from everyone! Can’t believe what a great job CBC did covering the race, both online and TV. Awesome that folks were able to watch from all over!! There’s a couple options for people to watch if they missed it, CBC has posted a three hour segment online and now has the one hour TV recap up too, recommend this one if you don’t have a lot of time.

Finally thanks Emily and Heidi for putting up with me the last few months, tired runners aren’t always the funnest people to be around. Also thanks Dave being a kick ass coach, and thanks to the rest of our amazing Speed River support team! There’s at least 10 folks I should name, I’ll do it in person how about that 🙂 Thanks guys! 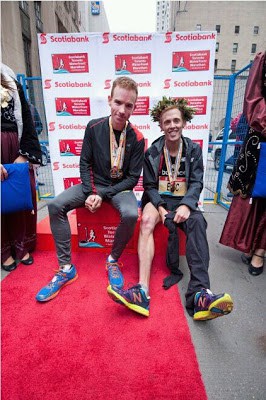 Parkersburg Half Marathon this weekend

Traveling to West Virgina this weekend to race a half marathon as part of our preparation for Toronto. Reid and I are both doing it. The course description is a hilly one which may prevent a quick time. But really you’d be hard pressed to find a place in Canada or the US  you can expect to run fast at in the middle of August.

On Sunday I competed in the Sun Run, Canada’s biggest road race with over 50,000 participants. I was aiming for the win but finished a few seconds back. It can down to a Kenyan, Kip Kangogo and myself in the last kilometer. He put on a strong move up the bridge, I covered and tried my own move coming down the other side but Kangogo had one more gear then I on this day. I wasn’t happy finishing second but it should get me refocused, time to train harder and smarter. 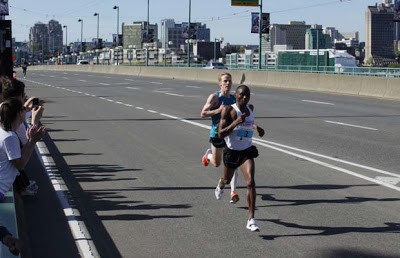